Gefilte fish is a traditional Jewish food served on Shabbos and the Jewish holidays. It is a loaf created with various types of ground fish and is usually boiled and served cold with sliced carrot and horseradish. There are a number of gefilte fish companies that prepare a frozen gefilte fish loaf ready for cooking.

Of course, I have experimented with different ways of preparing gefilte fish. This is one of he simplest. It is delicious and beautiful, too.

It will take a traditional gefilte fish and transform it into a wow appetizer.

Partially defrost 2 loaves of gefilte fish. I defrost the fish overnight in my refrigerator.

Place a single layer of thinly sliced carrots on top of spinach. 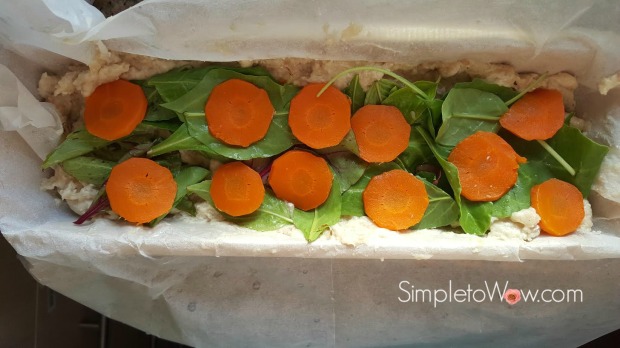 Remove second loaf of gefilte fish from wrapping and layer right over the carrot layer, pressing to make sure that the second layer of gefilte fish closes any gaps created by the spinach and/or carrots. Spread evenly and smooth top.

Bake for 90 minutes. Allow to reach room temperature before refrigerating terrine in the loaf pan .

To serve, wait until the terrine is completely cold. Carefully, remove terrine from the loaf pan. Unfold parchment paper top and sides, leaving parchment on the bottom. Cut the terrine in slices and serve cold.