Several weeks ago, Jackie, my Friday housekeeper informed me that she would be on vacation for two consecutive Fridays.  Jackie usually discards last week’s roses and arranges the roses that my husband, Don, brings home.  She most often opts for a traditional arrangement in a silver vase. 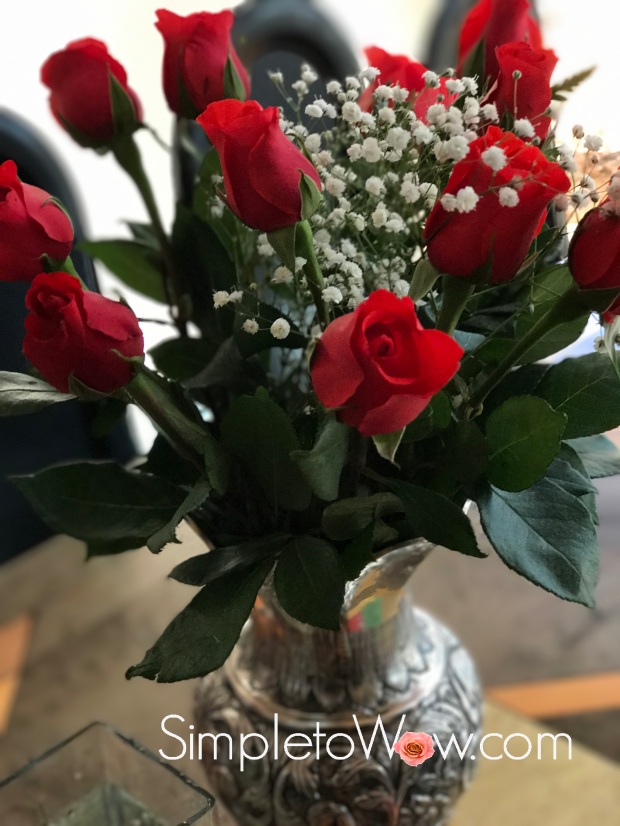 Friday arrived and Jackie was not there to toss the “old” roses and arrange the new ones. I was on my own!  Firstly, I assessed last week’s roses and decided that they were not so bad, after all.  In fact, the older roses had more interesting and mature blossoms than the new roses that were mere rose buds.

I cut off the stems right underneath the blossoms, took a square glass vase, filled it with water to the top and floated the blossoms in a grid-like pattern. I then took the new roses and arranged them in a tall vase and set the table with both vases. Voila!

The next Friday, Jackie was still unavailable, so I tried something different.  I took the week-old roses and arranged them in a narrow, long vase with only the blossoms showing….another stunning, simple and upcycled arrangement.

The upcycled arrangements seem to fetch more compliments than the traditional  arrangements made with the fresher roses, because the older rose blossoms truly are more open and interesting. Even if they are slightly wilted, the older roses float beautifully and straight when the stems are cut and they are arranged one right next to the other.

This Friday, Jackie is back (whooo…my house is a much neater and cleaner).  I have now reclaimed the floral arranging task and I’m nailing it!