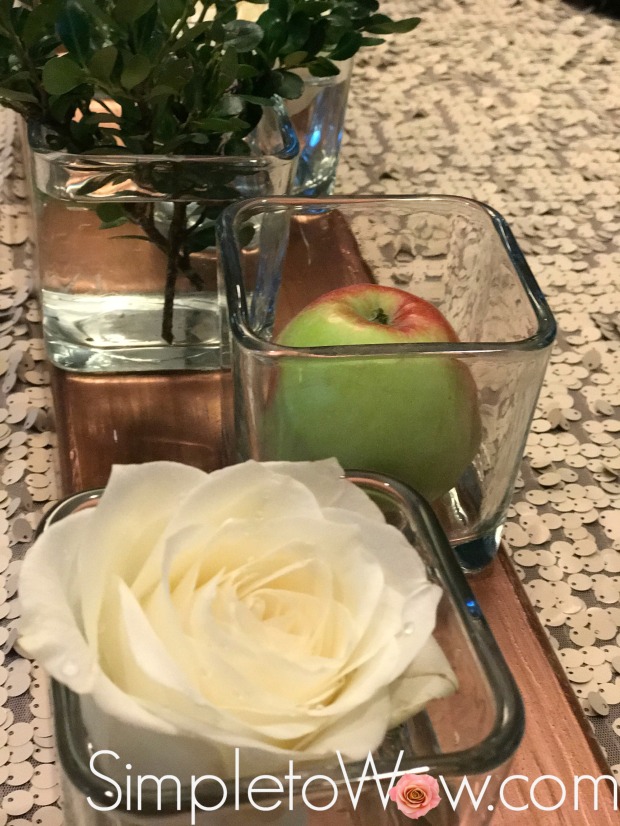 I was looking to create a SimpletoWow fruit and floral arrangement worthy of the Rosh Hashana (Jewish New Year) table.  On Rosh Hashana, we dip an apple into honey as a symbol for a sweet new year (see Dip the Apple… Rosh Hashana Cupcakes), so incorporating apples into the arrangement was a no-brainer.    I wanted the apples to remain as pristine as possible so that they can be admired as part of the table arrangement but still be ceremoniously eaten later. 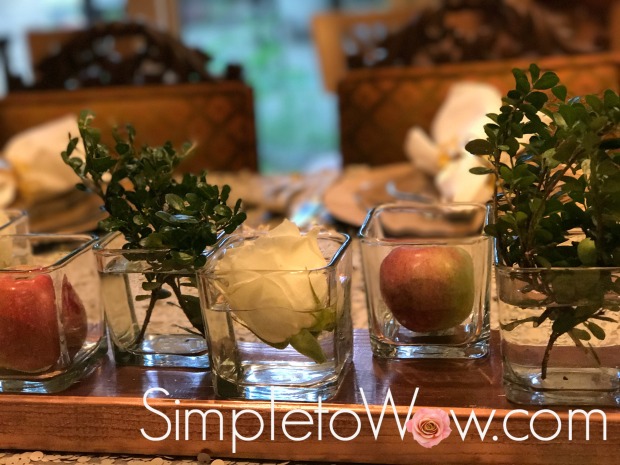 Spray paint the top and all sides of the beams in your favorite color.   I used metallic copper spray paint.  Allow to dry.

Cut two open rose blossoms off of stem.  Float each rose in each of two vases filled with water almost to the top.

Cut six short and full boxwood stems.  Place three boxwood stems in each of two vases filled with water almost to the top.

Select interesting and unblemished apples sized to fill the remaining two vases.  Place these apples into the vases without adding any water.

Set up the six rose, apple and boxwood clear 4″ square glass vases at equal intervals along beam, aligning first and last vases with the edges of the beam.  Optionally, alternate vases on the left and right sides of the beam.

Please Note: This post contains affiliate links from Amazon, which means I earn a small commission if you click and make a purchase. 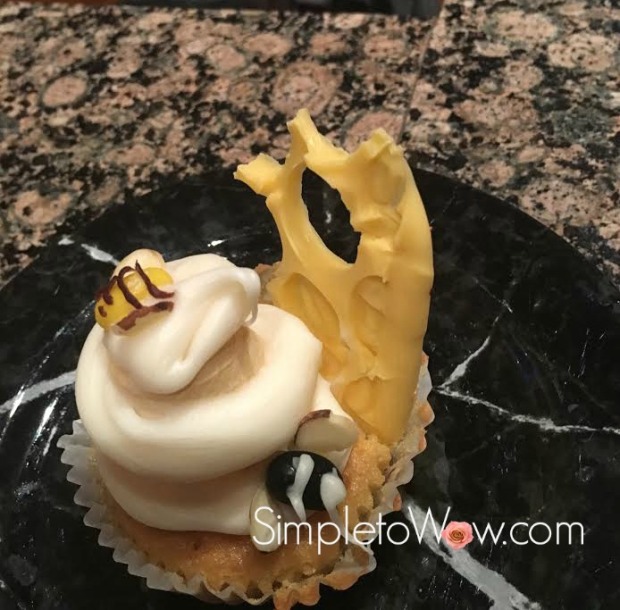 Last year, Davida baked delicious muffins for this bake sale.  This year Davida and Staci’s daughter, Chava, are  studying in Israel, so I offered to bake and send over some cupcakes for this important event.  Although Davida and Chava are the true masters in my kitchen, I felt that I needed to prove that I still had some kitchen prowess.

I decided to bake two sets of cupcakes to represent the important and symbolic tradition of dipping an apple in honey on Rosh Hashana.  The first set of cupcakes were Dip the Apple… Rosh Hashana Cupcakes.

Now, all we needed were the honey cupcakes.  For these, I decided to prepare cupcakes shaped like beehives, with edible chocolate honeycombs and adorable jelly bean bees.

We dip an apple into honey at our festive evening meals on Rosh Hashana to symbolize our hope and prayer for a “sweet” New Year.   Honey is one of the symbols for the Land of Israel as the Torah describes Israel as a land “flowing with milk and honey.”  It symbolizes the connection between G-d, the Jewish nation and the Land of Israel.

The honey referred to in the Torah is date honey.  Today,  date honey is sold in Israel, but most of the honey found is bee honey.  These cupcakes were shaped liked beehives to represent this sweet symbol.

These cupcakes are available for sale among other delicious desserts at the Segal Home this Sunday, September 25th, 2016 from 2-8 PM.  Their address is 475 FDR Drive #301 on the Lower East Side. For more information, please contact Staci at 917-295-7295 or stacisegal@aol.com

Melt chocolate wafers or chips.  I use the defrost feature on the microwave.  I spread the chocolate out on a microwave-safe dinner plate and place it on defrost for 6-8 minutes.

Spread the chocolate out on a piece of parchment or wax paper, keeping the chocolate thin but not translucent.    Press clean bubble wrap with bubble side down onto melted chocolate. 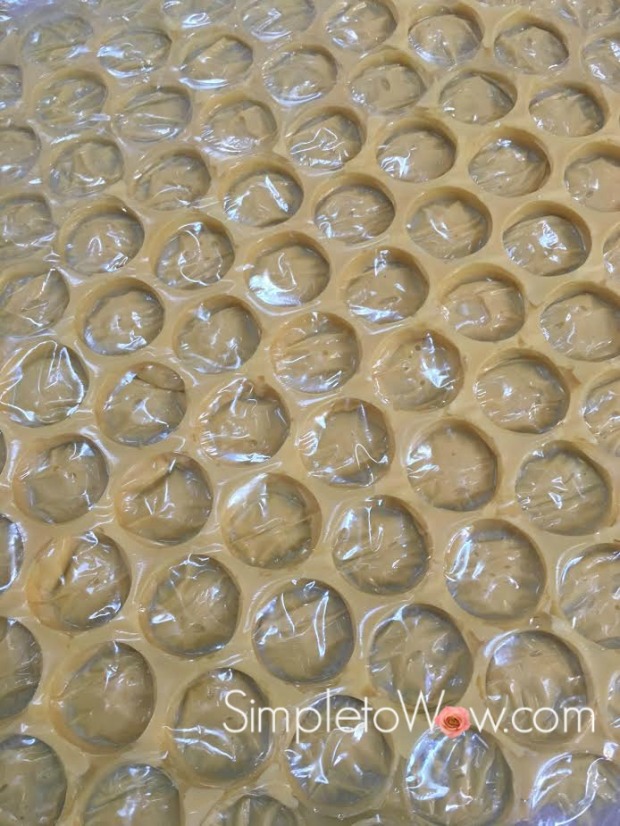 Keep bubble wrap until chocolate has hardened and carefully peel off.  Break the chocolate into chards that resemble pieces of honeycombs. 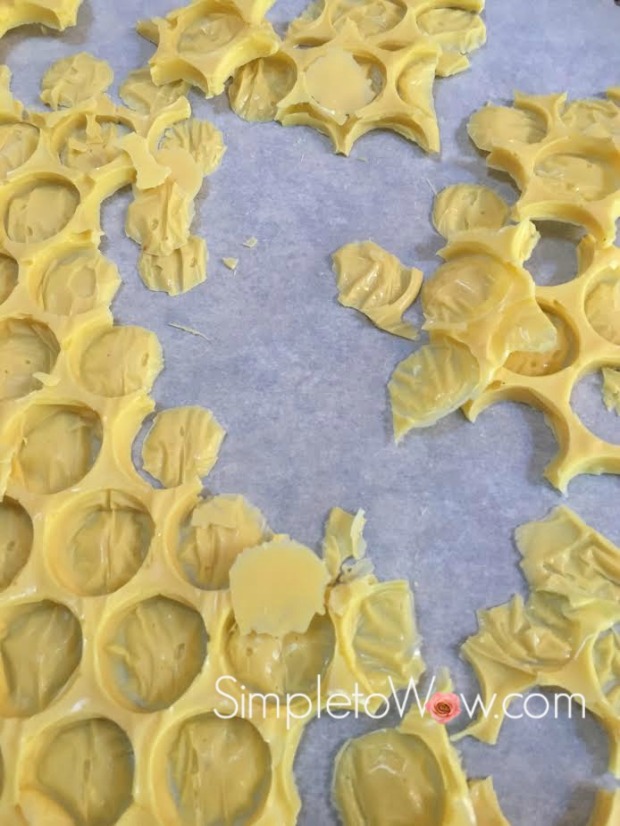 Place a mini cup cone upside down in the center of each cupcake, pressing down until it is set into place.

Fill a ziploc or piping bag with white or yellow frosting.  To do this neatly, place a bag in a tall glass and fold the top of the bag over the edge of the glass like a collar.  Using a spatula, fill the bag.  Cut corner of bag with an opening big enough to pipe thick frosting.  Squeeze frosting to corner carefully. 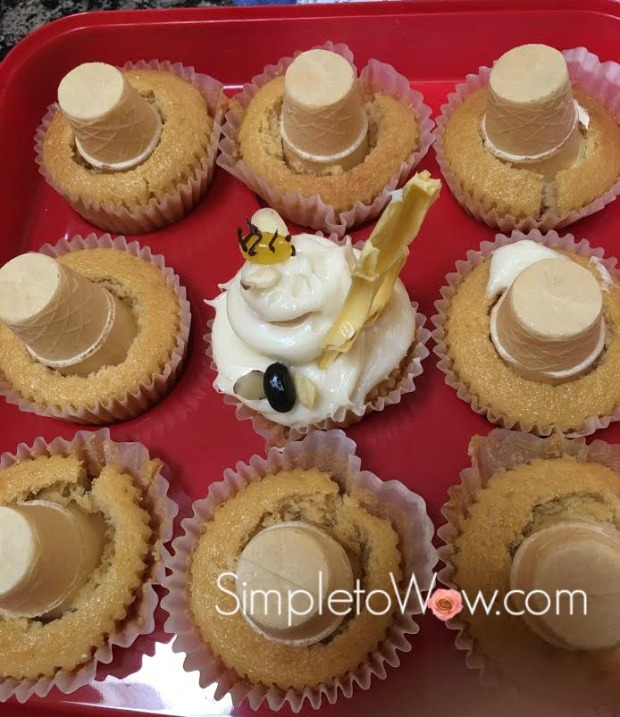 Pipe frosting on each cupcake, surrounding upside down cone and piping to top of cone.

Fill two small ziploc or piping bags with chocolate and white frosting.  To do this neatly, place the bag in a tall glass and fold the top of the bag over the edge of the glass like a collar and fill with frosting.  Cut corner of bag with a tiny opening to pipe thin stripes on the jellybean bees.   Carefully squeeze frosting to corner. 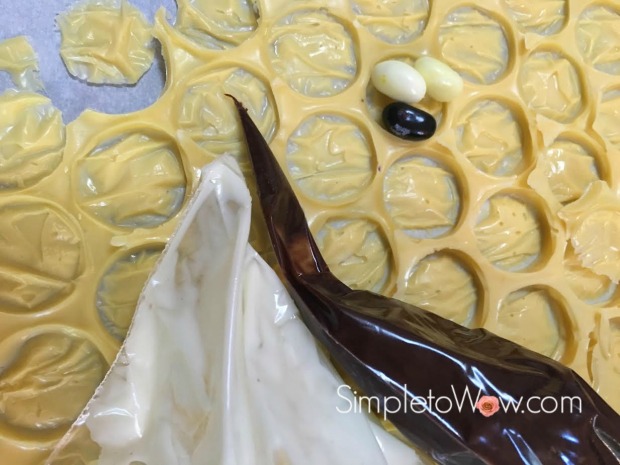 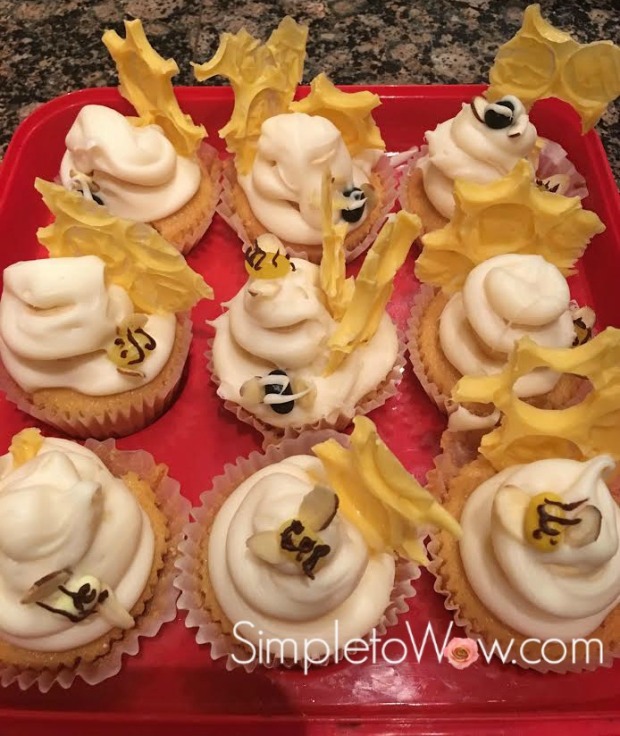 Wishing you all a Kesiva Ve’Chasma Tova (a positive inscription and seal for the upcoming year).

Last year, Davida baked glazed carrot muffins for this bake sale.  This year Davida and Staci’s daughter, Chava, are spending the year studying in Israel, so I offered to bake and send over some cupcakes for this important event.  I wanted to make sure that the Segal bake sale would have adequate Respler representation.

I sat down to think about what I could bake that would be unique and delicious.  It needed to be something easy to transport,  interesting and something appropriate for Rosh Hashanah.

The first thing that came to mind was an apple dessert.  The apple is such a strong symbol of Rosh Hashana.

During Rosh Hashana (Jewish New Year), we eat apples dipped in honey as a symbol for a sweet new year.   It is interesting that an apple is chosen as the fruit to dip.

One reason is that in King Solomon’s Shir Hashirim (Song of Songs), the nation of Israel is compared to an apple.  “As the apple is rare and unique among the trees of the forest, so is my beloved (Israel) amongst the maidens (nations) of the world.”  Furthernore, an apple is symbolic of the love between the nation of Israel and G-d as we read in Shir Hashirim , “Beneath the apple tree I aroused you.”

We are taught that an apple tree sprouts the tiny core of each apple before the leaves surround and protect the young fruit.  In the same way, the young Jewish nation accepted the Torah before understanding the myriad of details within.  The famous acceptance of our nation was verbalized as “we will do and we will understand”.  We committed to the holy observance of Torah commandments even before we understood the full extent of what this commitment entailed.  Therefore, the apple has become a symbol and remembrance of the commitment to our faith and acceptance of Torah at Mount Sinai.  We recall this on Rosh Hashana when our mission is to proclaim G-d as our King.

I decided to prepare cupcakes designed to look like red apples.  I baked vanilla cupcakes for this recipe.  Perhaps, next time, I will prepare honey cupcakes to fully represent the Rosh Hashana tradition of “dipping the apple in the honey”. 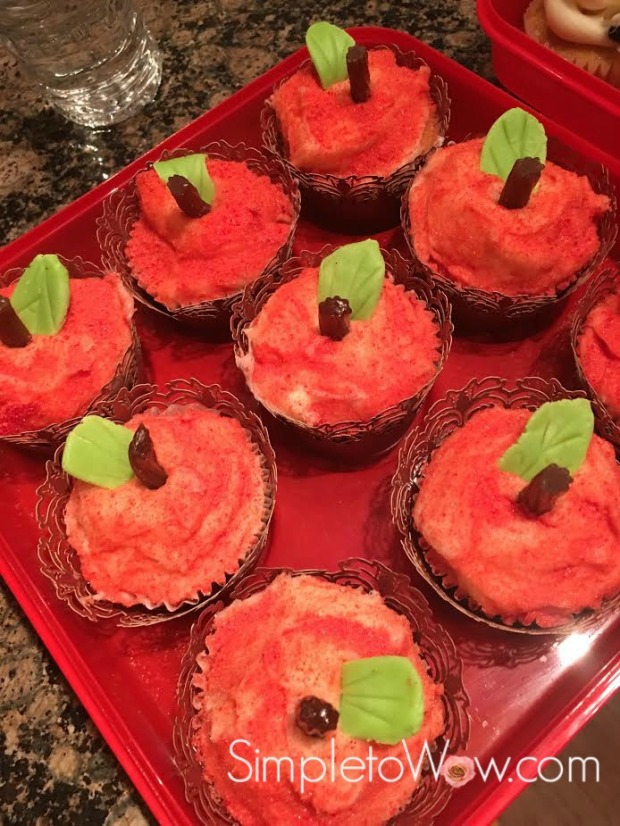 These cupcakes are available for sale among other delicious desserts at the Segal Home this Sunday, September 25th, 2016 from 2-8 PM.  Their address is 475 FDR Drive #301 on the Lower East Side. For more information, please contact Staci at 917-295-7295 or stacisegal@aol.com 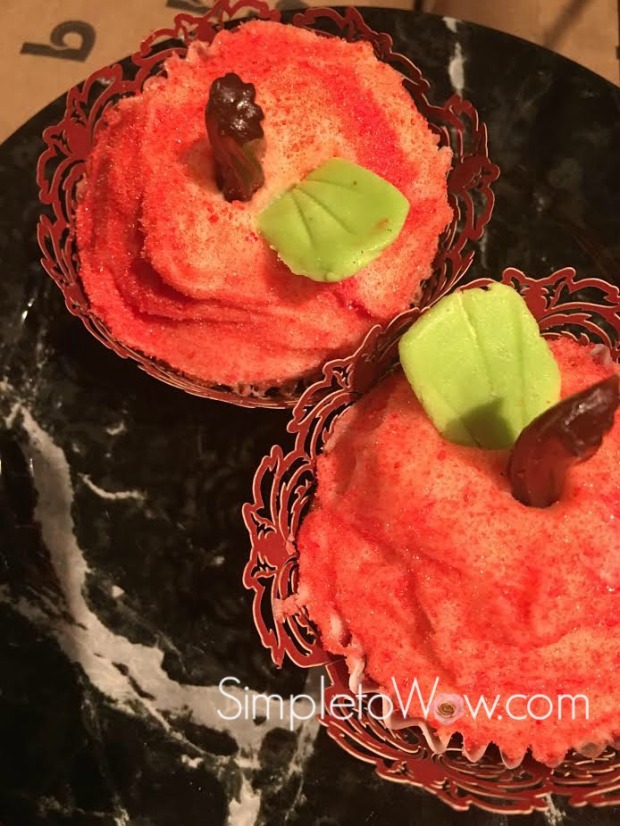 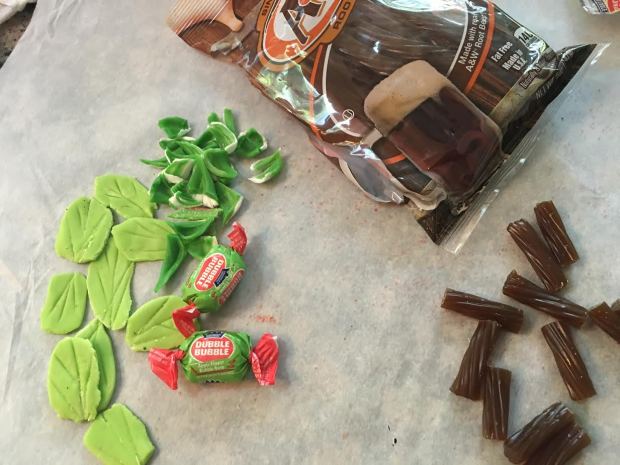 Flatten green gum or taffy and use knife to cut out leaf shapes.  Use blunt knife to form leaf veins. 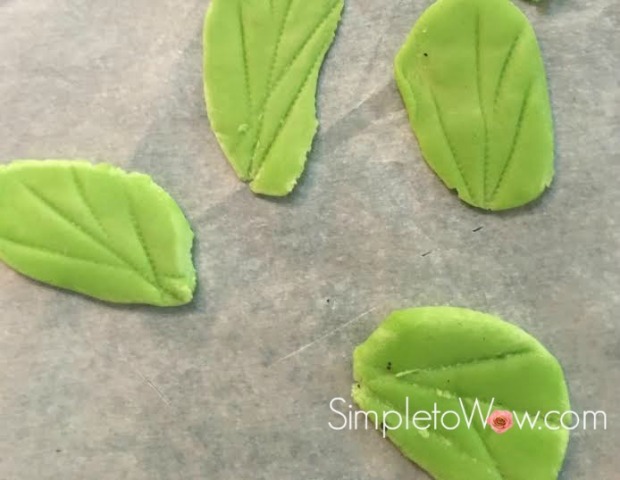 To make red sanding sugar, combine 1 cup of sugar with red food coloring, adding food coloring until the desired depth of color is reached.  I pulsed this in my food processor.  Alternatively, you can combine the sugar and color in a ziploc bag or in your mixer. 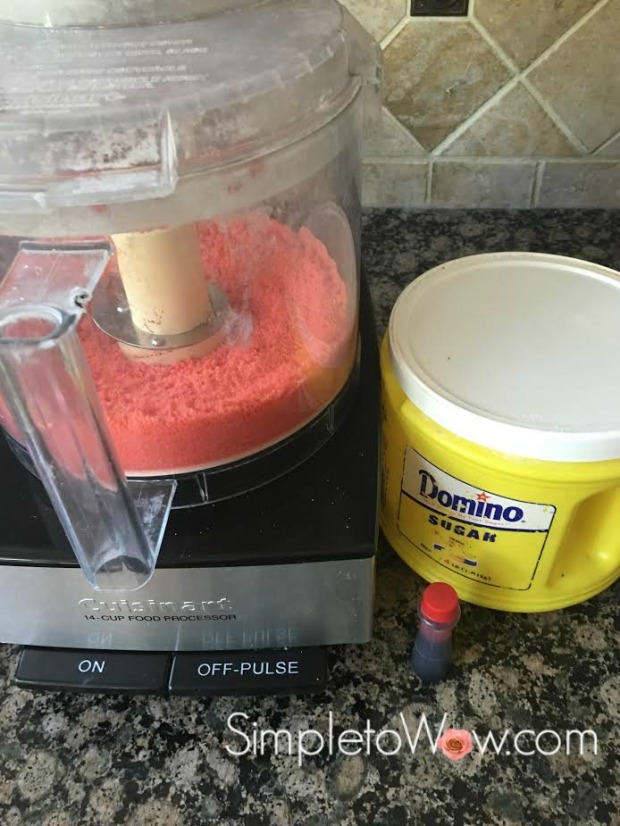 Frost cupcakes generously with a small knife or spatula, heaping frosting to form a mounded top for each cupcake. 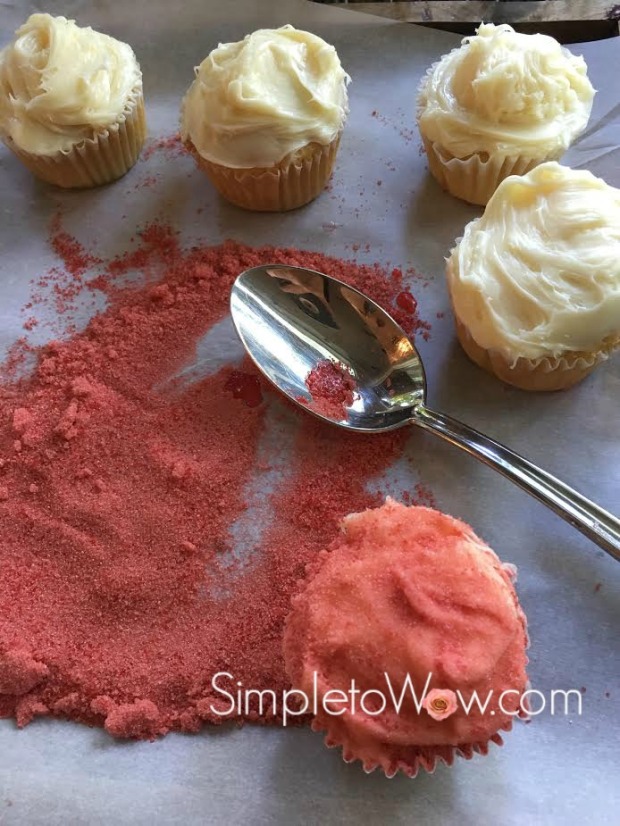 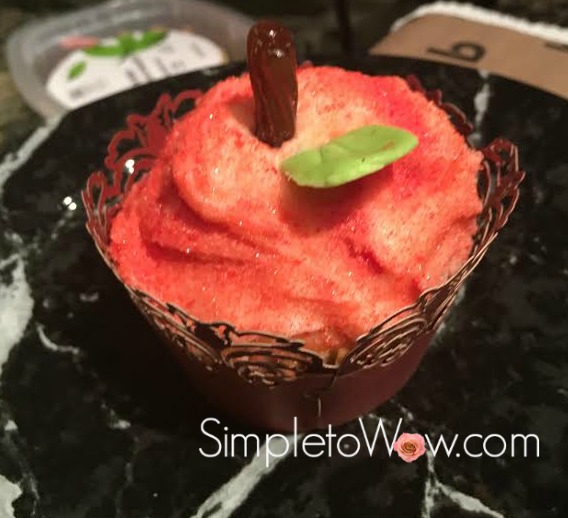 Wishing you all a Kesiva Ve’Chasma Tova (a positive inscription and seal for the upcoming year).