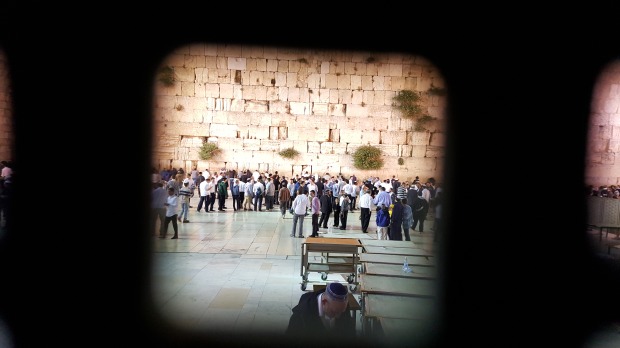 We are in Israel and the saddest day on the Jewish calendar has begun. Tisha B’Av (the ninth day of the Hebrew month of Av) has been commemorated throughout the ages as a day of Jewish national tragedy. It is the day that both of our Holy Temples were destroyed and a day that is filled with mourning, trepidation and many tears.

It is a day that the following terrible Jewish tragedies have occurred:

We fast on this day, we sit on or close to the floor and we cry for the pain of the losses, the devastation and the void left by the destruction of the Jewish Temples almost 2000 years ago. Our tears are for the majesty that was lost and for the light of the connection to G-d at the time of the Holy Temples that was unparalleled. We cry over what we had and what we have lost.  And we pray for our tears of sadness will be replaced with rejoicing upon the final redemption.  .

According to the Jewish calendar, the festival of Pesach (Passover) always falls out on the same day of the week as Tisha B’Av. In Hebrew, there is no real word for coincidence because in Judaism things are just not coincidental. Things that happen in the same way were meant to be that way. And so, there must be a connection between Pesach, the festival of Geula (redemption) and Tisha B’av, the day of national mourning.

Only by understanding what we are missing can we ever hope to regain that which has been lost. And, so, on this day of national mourning, we lament the loss of the grandeur of the Holy Temples, the unity and the closeness that the spiritual relationship we experienced  during that time.  We read Megillas Eicha (the scroll of lamentations) and we shed true tears for all the tragedy and pain that has befallen our nation and has taken us from the holiness of an era long past.

On this terrible day in history,  the structure of our precious Temple was set afire by our enemies. And, the most intense burning of the wood and stones of our Temples occurred at midday.

So, why would midday, the time of the most painful sight of the fiery destruction of our most holy site and of the holiest place on earth, be the time that we start lessening our mourning?

Because precisely at the moment that our precious Temples began burning did we see the hope for the future and the end of our mourning.

At midday, yes, our holiest Jewish sites were burning but we understood that our nation would survive. G-d had chosen to pour out his wrath on the stones and wood of Jerusalem’s holiest site and left our nation to repent, heal and hope for redemption.  That is true continuity and that is mourning with a mission.

And that is precisely the connection to Pesach. Pesach is the celebration of our becoming a nation and our hope for the Final Redemption. Tisha B’av, although painful, is integral for forcing us to recognize what we have lost.  It is the ultimate day for us to contemplate our continuity and redemption and return to what we had.   Tisha B’av is the day to elucidate what we had and cry real tears of understanding for the enormity of the void left by these losses. Only then, will we be granted the merit to witness the Final Redemption and the rebuilding of the Holy Temple.